Sevilla has a special colour, the sevillana song says…it’s vibrant, welcoming, mystical, full of “alegria”, and pure magic! It’s one of my favourite cities of Spain. It’s hard to not feel energised when walking along its streets and encountering her people, especially during special events such as Holy Week or the Feria de Abril. But Sevilla is special anytime of year; albeit it can be a hot inferno in the summer, it is still enjoyable. 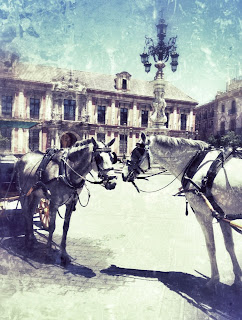 Horse carriages, waiting for passengers, outside the Palacio Arzobispal
Sevilla smells of orange blossom, of incense, of roasted chestnuts…her boisterous and joyful people are always ready to wish you a good day with a smile, and maybe a wink, and the sun shines differently in Sevilla, its luminosity and intensity enhancing the kaleidoscope that envelopes the visitor. 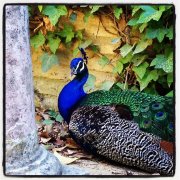 Peacock in the gardens of the Alcazar de Sevilla 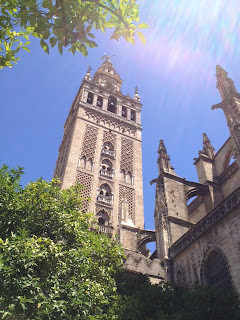 Legend tells that the city was founded by Hercules. But historians tell us otherwise. One of the first people to make the city flourish were the Tharsis, followed by the Greeks and the Romans, whose descendants named the city Ispal, which later evolved to Sevilla. The Moors established an important seat of their empire in what they called Hispalis.

The Moors, reigning in most of Andalucia and parts of Spain for close to 800 years, left a huge influence in the language, the cuisine, the architecture and the culture, in general. 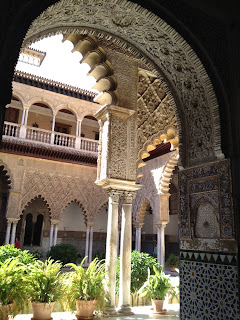 Inside patio of the Alcazar de Sevilla, Moorish section

From the time of Al-Andalus, we have inherited many ingredients, such as almonds, oranges, apricots, altramuces (lupin beans), rice, and numerous recipes and dishes. Many of these moorish ingredients and dishes that eventually made it into the Spanish vernacular start with an “a”, such as azafran (saffon), aceitunas (olives), aceite (oil), albondigas (meatballs); and many include a combination of spices brought to Spain by the Moors and their trade routes with the East, such as canela (cinnamon), comino (cumin), culantro (coriander) and anis. Pickling fish in vinegar solutions (boquenos en vinagre, adobo) was also brought to Spain by the Moors, and is extensively used today in the Andalusian cuisine.Although today, we have a lot of “fusion” ideas in our tapa and menu repertoire, it’s hard to eat anywhere in Spain without eating something that originated with the Moors.One of the dishes I make regularly, because it’s easy and healthy are albondigas (meatballs). Meatballs are usually served as small balls, fried and then covered in a tomato sauce. However, as I don’t like mine fried, nor am I a big lover of tomato sauces, here is my mother’s version, altered by me.

Process
In a mixing bowl, mix the ground meat, chopped onion, garlic, eggs, flaxmeal, sea salt and nutmeg. You want to mix just enough so all of the ingredients are blended. With your hands, form balls and set aside on a platter.

In a large saucepan or pot, heat the oil over medium heat. Add the onion and saute about 4-5 minutes. Add the saffron threads and turmeric and saute about 30 seconds before adding the white wine. Cook for 2-3 minutes to reduce the wine.

Add some chicken broth, about 1 cup. Insert the raw meatballs into the saucepan, making sure to place carefully side by side or if needed on top of each other, without breaking. Add more broth, enough to cover the meatballs (about one finger above them, actually). Over low heat, cook for 40 minutes covered. Check frequently, and if the broth evaporates too much, add a bit more. The desired sauce consistency is slightly thick, so you do not want to add too much broth.

My husband loves to eat these meatballs with homemade french fries, but they can be served alone, with some vegetables or rice, whatever your preference.

*Maria Luisa is my mother’s name and this is a revised version of her original recipe. Maria Luisa is also the name of the largest public park in Sevilla, which is a glorious place for a reprise from the Andalusian sun. Filled with an extensive variety of flora, lovely avenues, arabesque fountains, and a variety of birds, such as peacocks, pigeons, and ducks, it’s a peaceful and enchanting environment, recently named “bien de interes cultural” (cultural interest property). On it’s north side, the park ends at the Plaza de Espana, the emblematic architectural project of the 1929 World Fair.  A must see, when in Sevilla!