I was in Sevilla in late June-early July, and in time to enjoy the snail season, amongst other delights for the palate. Snails are commonly eaten in Spain, as caracoles (little snails) and cabrillas (a large, escargot size). The mollusk is in season from the beginning of Spring to roughly late-July, mid-August, depending on origin. Lately, the season starts as early as March, with these snails coming from Morocco. The harvest of the local snail typically starts in April-May.
Caracoles are typically served in small transparent glasses, where one can see the snails and the clear, spicy broth through the glass. When eating caracoles, Spaniards tend to make a lot of noise trying to suck out the little critters.
Cabrillas (pictured below) on the other hand are made in a thicker sauce, usually almond or tomato-based. It’s a delicious treat to dip some bread into the sauce and enjoy this in addition to the snails. 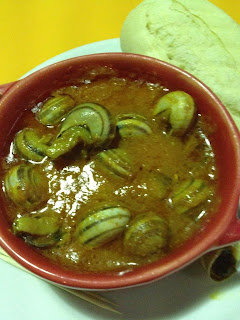 There are, of course, hundreds, if not thousands, of varieties of tapas. In fact, one can make a tapa out of any dish. The origin of the tapa is obscured in legends and stories. But the general consensus is that bartenders starting placing a small plate on top of a glass of wine or beer or even a coffee to cover the contents and protect them from flies falling in, while the customers chatted between sips. In Sevilla, I’ve always heard that bartenders in coffee houses would send over a coffee or drink to the customers of the barber shops with a cover to protect the beverage en route across the street. Whatever the history, little by little, the tapa has evolved into an entire cuisine, which is quite sophisticated and a delectable way to experience the rich flavours of Spain.Spaniards like to have a few tapas and a cold beer, preferably a Cruzcampo, or a glass wine before lunch, usually eaten at home during the approximately two hour mid-day break from work. Tapas are also enjoyed in the evening, and times vary by region. In the south, where we eat the latest, one can usually find a tapa bar open from about 8pm onwards until 1am or later, if it’s summer and the evening is warm.
Another delicacy, which was in season during my visit, is coquinas de Huelva. Coquinas are a small, elongated clam found on the beaches of the coast of Huelva. My mother tells me many stories of how as a child, growing up there, she and her cousins would go “fishing” for coquinas during the summer. They are very easy to make and as addictive as eating pipas, or sunflower seeds (another typical Andalusian pastime)!

Coquinas de Huelva
Ingredients
Process
In a skillet, pour about 4-5 tablespoons of olive oil, and heat up. When the oil is hot, add the garlic and the coquinas. Cook, moving occasionally, until the clams open.
Once all the clams are open, add the white wine and the parsley. Cook 1 minute or so and add salt to taste, if necessary. Remove from stove and serve immediately. Enjoy!
*Instead of coquinas (pictured), another variety of clams can be used.